When I was really young, I used to say I wanted to be a teacher, a lawyer, and a hairdresser. That was my mantra as a child. My Nan is Caribbean, and so the idea of being a lawyer—for her, that’s what everyone should be. They all want you to be a lawyer or a doctor or a teacher or something respectable.

It wasn’t until I was 12 and started taking classes at the Anna Scher Theater, a community theater in Islington, where I grew up, that I fell in love with acting. Anna Scher was this really cool, older hippie lady who would teach us peace poems and things like that. I learned about social justice through that class. It was extremely cheap. It wasn’t a stage school; it was a community center. That’s what I really enjoyed about it. 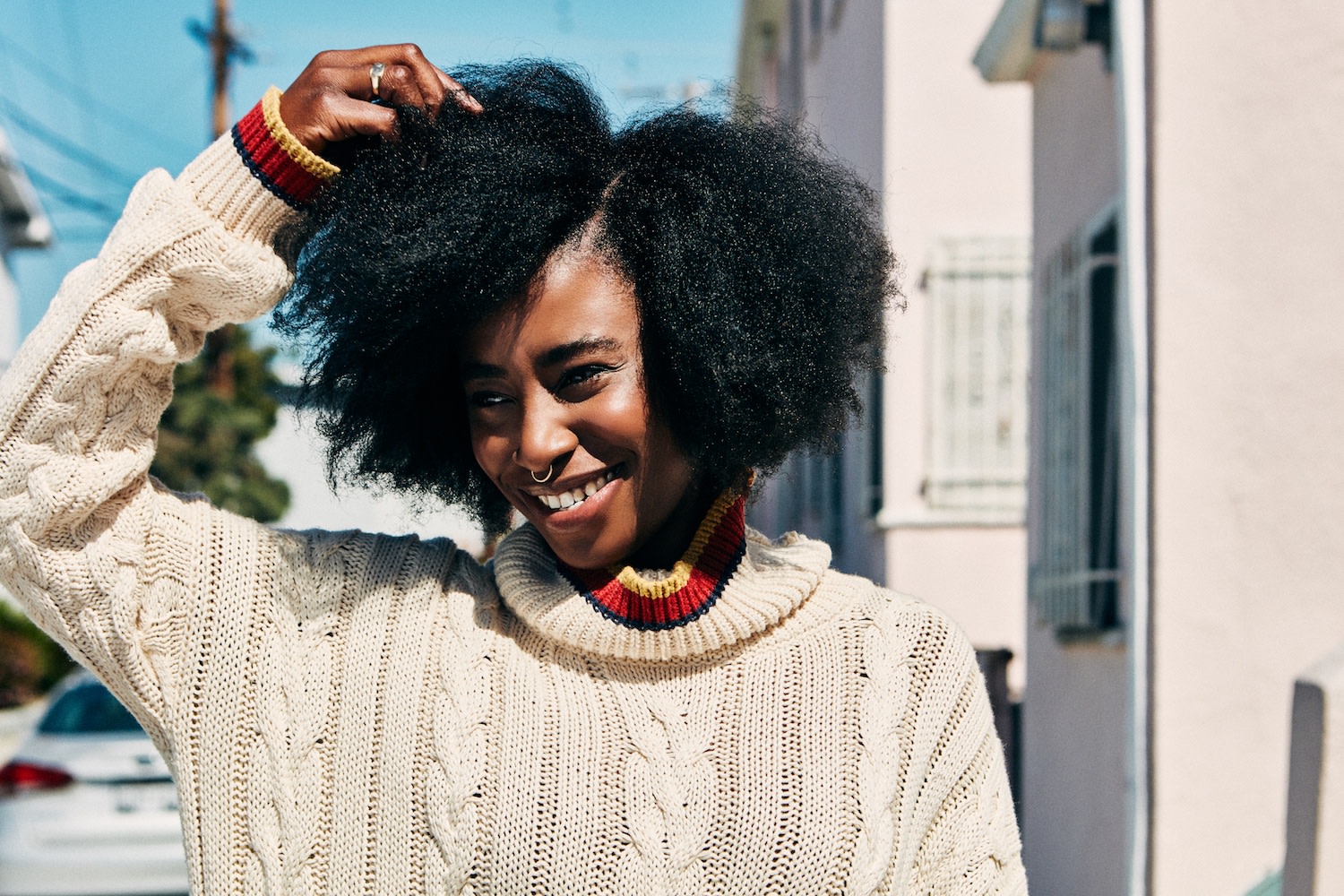 I moved out here like seven or eight years ago—it goes so fast. Some people do the New York stop-off. I did not do that; I moved straight to Los Angeles, I think I’ve had a bit of a non-traditional start. Most British actors reach a certain point in England and then move because they feel like they have to. But I moved here with someone else, because they were moving—and not that my career was secondary, but it was more like, “I’ll figure that out once I get there,” assuming it would be a lot easier than it was.

The comedy thing happened by accident. I think I’ve always been quite comedic, but I went to drama school. I remember when I would write scenes or whatever, they were always criticized for being too comedic. It felt like it all had to be very high-brow and serious. I lasted two semesters and then left and moved out here. I wasn’t pursuing comedy at all; I was working under the table at a café because I didn’t have all my paperwork yet. I had a friend who told me to try Upright Citizens Brigade, so I went. My boyfriend at the time bought me my 101—my first pack of classes—for my birthday, and I loved it. I powered through the classes. I went from level one to level four within a year. But I had the exact same feeling I had when I was at Anna Scher. It was so fun to be able to play with people.

As much as you would like to, you don’t always get that experience on set. The stakes are often a lot higher. Improv is fleeting. You do a show, and you’ll never do the same show ever again. People may not even remember it. It’s just gone. It’s truly the purest form of playing pretend as an adult you can get. But with TV and movie productions, it’s just . . . different. You have people that you’re accountable to and contracts and a profit to make. But then you get a job like Barry, and you forget all that. You get to play pretend again because you’re cast with really great people who are so fun, and you’re all friends outside the show. But that’s so rare. Barry is one of the most unique professional experiences I’ve ever had. 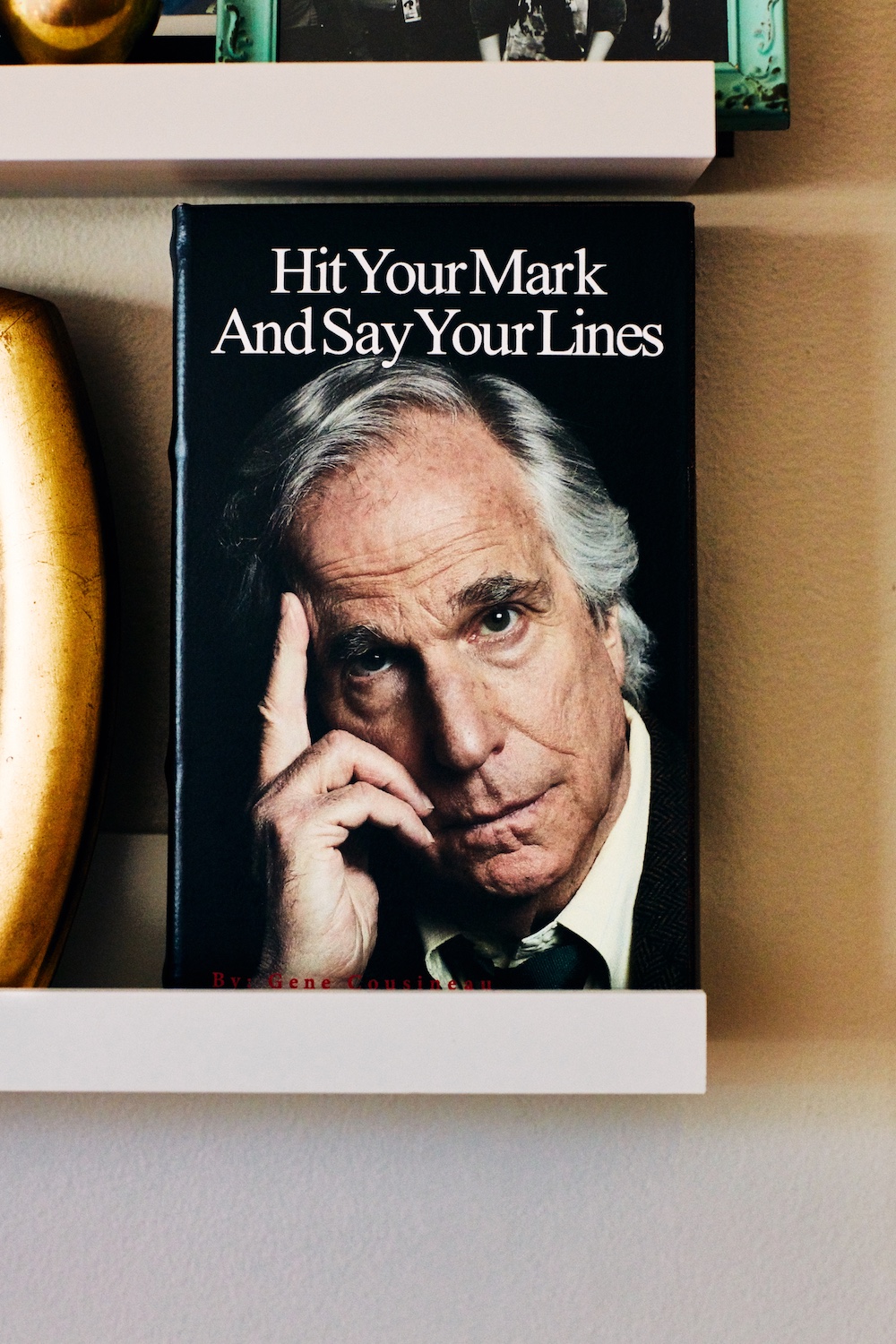 My mum’s a single mum, but she gave us really fun upbringing. She’s a very fun person—I think I get that from her. She’s always singing and making up songs and dancing around the house. My friendship groups are more or less the same as they have always been—my closest friends are the ones I’ve known since nursery school and high school—which I think is incredibly important. There’s a weird thing in this industry where, once you get to a certain level, there’s this instant friendship thing that happens. All of a sudden, you’re accepted. You’re somehow verified, and people are like, “Yeah, we can be best friends.” And you don’t know them, you just both happen to be working actors. I find it very weird and hollow, so I think it’s important to maintain the friendships that you had before you started doing any of this stuff.

I still don’t feel quite a part of things, but I think there are little moments. In 2016, I went to Sundance, and I remember sitting next to Rashida Jones on the plane, and she was absolutely lovely. We chatted the whole time and then went our separate ways. And then this year, I went to a Time’s Up brunch for Black women in Hollywood. I went because I was like, “This is a good event to go to. It’s going to be a learning experience.” But it always makes me feel a bit like being the poor kid in a rich school—like the kid at a private school who’s on scholarship. So I went to this thing and, as always, I made a beeline for the food. And Rashida came up next to me to get in the queue. We made eye contact, and I said, “Hi, I don’t know if you remember me; I’m Kirby. We met years ago.” And she was like, “Oh yeah! Kirby Howell! I remember. I’m always trying to get you in on things. I love Killing Eve.” That was a reminder to me that, even if you don’t see things happening, sometimes they’re just percolating behind the scenes without you knowing. 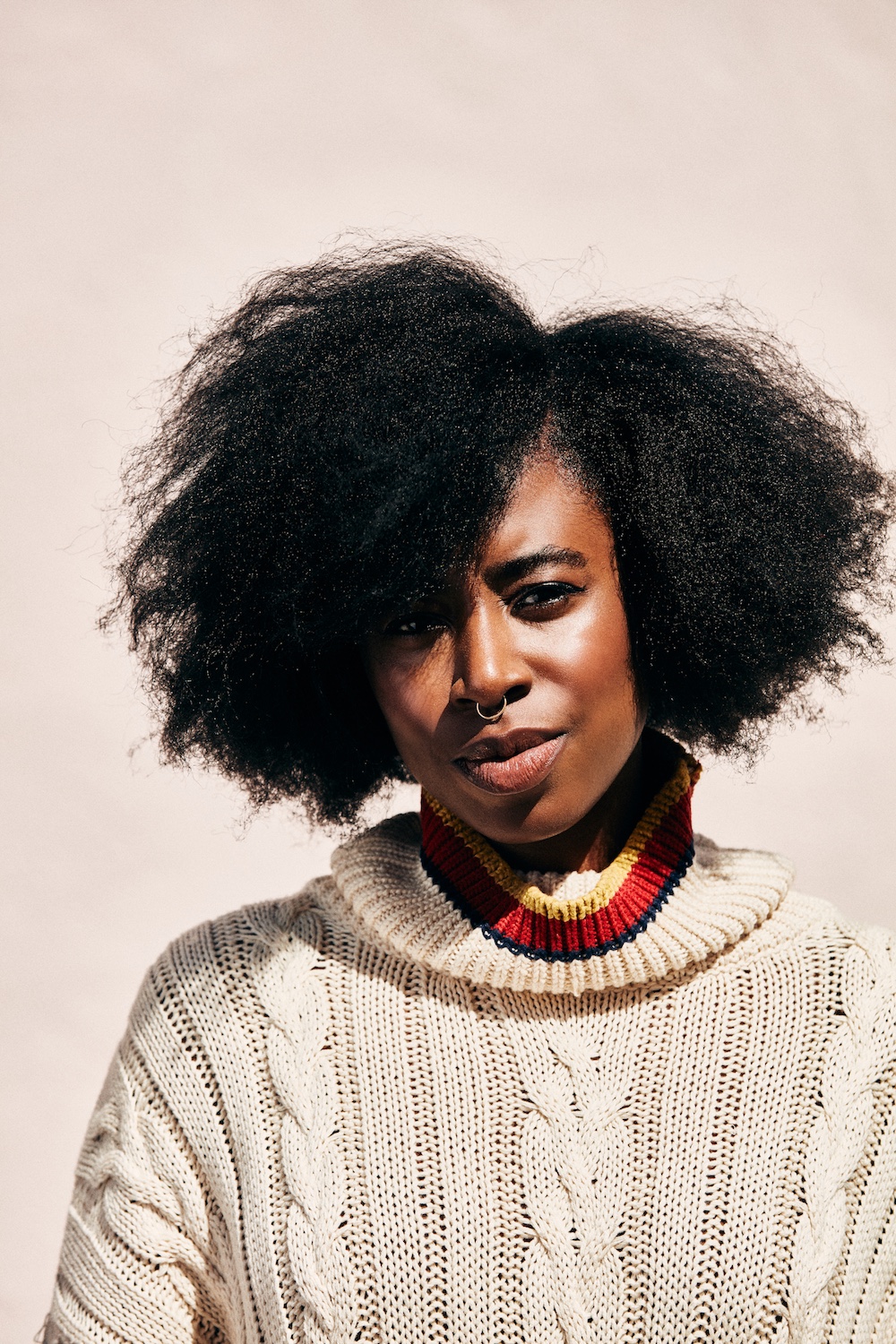 I think in order for the “Me Too” and “Time’s Up” movements to become actual movements and not just moments, we need the people who hold the power to dismantle those systems. It’s bigger than just Hollywood, and it’s bigger than just a few guys doing bad things. It is indicative of systems of abuse that are pervasive and systemic. They are built into American society and the world because they’re built into the patriarchy and white supremacy.

We talk about rape and sexual harassment as women’s issues, but they’re actually men’s issues because these are issues that, for the most part, men are perpetrating. It’s the same way with most civil rights movements: you have to actually go to the source of the issue. You can’t rely on the victims of these systems to dismantle them. You have to go to the perpetrators. And it’s a little bit on everyone.

If you’re an agent or if you’re in an office, maybe don’t hire a white guy or a white woman as your assistant. Maybe pick someone else who, in turn, will move up the ladder, and then they will become part of the system. Or if you’re looking at roles and you realize that all the leads are white and you’ve made all the supporting actors people of color, maybe flip that. It takes a lot of conscious effort every day to try and undo the brainwashing that is all around us. 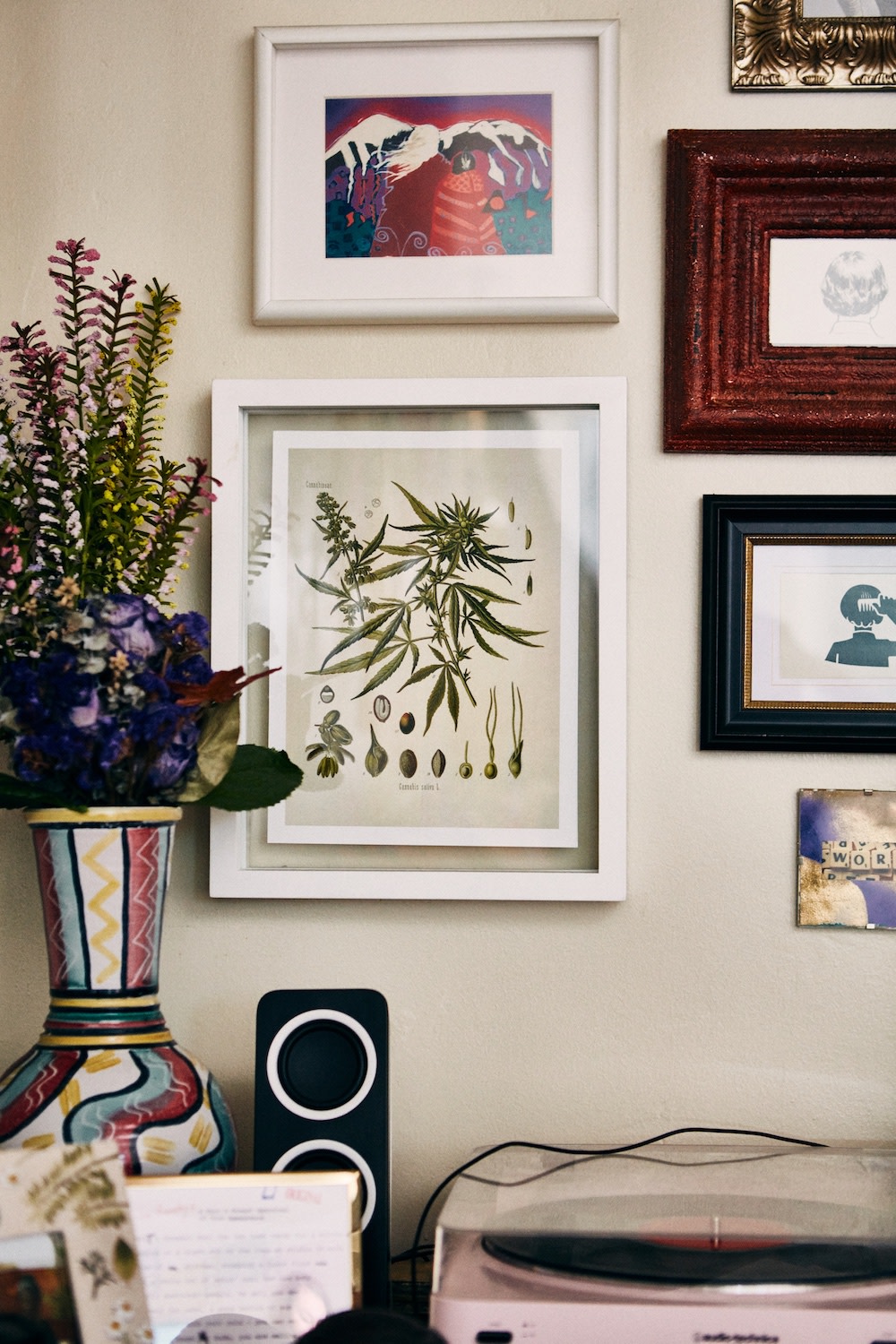 I think it’s important to do things that protect your happiness. Some things are unavoidable, like when I get work emails and it’s like, Oh, I didn’t plan for that in for my day. But then there are things that are completely avoidable. For a lot of people, social media is a point of stress, anxiety, and insecurity. But you can just avoid all that by not being on it or not looking at it. No matter how well you’re doing, you’re going to look at this very curated site of people’s lives and feel in some way that you don’t add up. It’s designed for that—that’s the only reason the interface works. If I, in general, walk around and don’t really care what strangers I pass on the street think of me, why would I then subject myself to caring what hundreds of thousands of people on the internet think?

I just want to keep working on good things. That’s always been my goal. The fact that all three shows I’m on—Killing Eve, The Good Place, and Barry—have been, and I think rightly so, critically recognized and celebrated is super cool. People will ask me, “Do you get it? Do you realize how big this is?” But when you’re working, you’re just going from job to job to job. I guess there’s part of me that’s like, sure, yes. But it’s like your birthday, where everyone else is far more excited about it than you are. 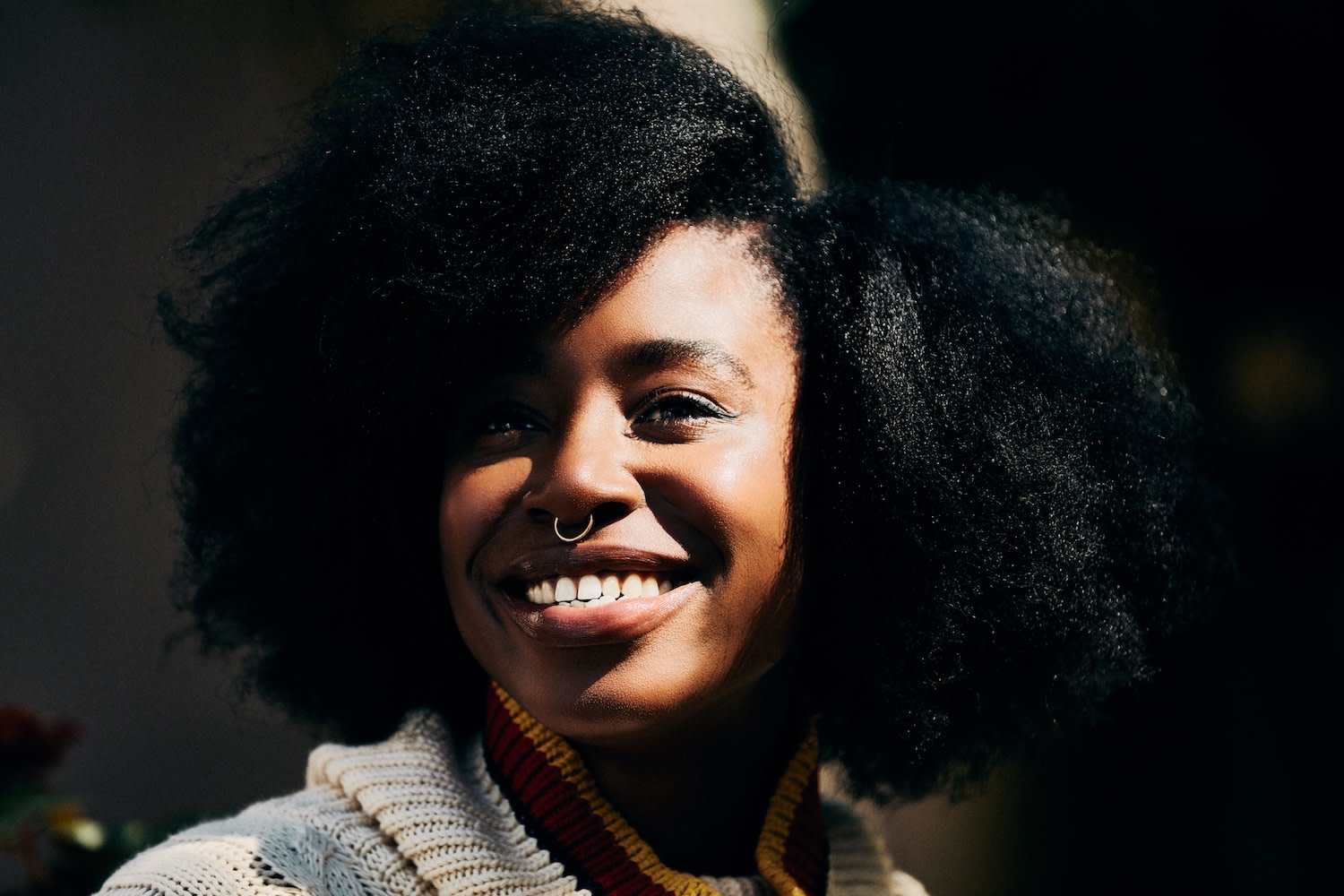 It’s interesting because I think we all want to be in movies and everyone wants to be in a lead role. And then I look at someone like Olivia Colman, who I’ve been watching for years. She did all this stuff that not a lot of people knew, but she steadily kept working and getting better. I look at a career like that, and it’s so much more exciting for me than being a huge star. I’m much more of a slow and steady person, I think.

Whenever I have long periods of downtime, I go home and spend time with my family. I’m very domestic. I pick my niece up from school and go to the cinema with her and my nephew, and hang out with my mum. My mum has a little stall in Earlham Street Market, and I’ll go work in the stall for her when I’m there. When I’m not working, I love crafting. I make my own kombucha; I bake bread; I make candles—most of these things are done high. I truly just like spending time on my own getting high and making things. Or I travel. If I feel like I need a little break, I’ll go to Joshua Tree or Palm Springs for a couple days and just chill in a hotel and swim and eat and smoke weed and sit in a hot tub.

My friends once described me as a fun shaman, which I really love. Once in a while, I love to organize a big thing for all my friends. This is where the fun shaman comes in. Every 4/20, I organize a day of fun. Last year, we started at a dispensary, and then we went to Dave & Buster’s, and then to Sherman Oaks Castle Park to play mini golf. Or I’ll go on Groupon—I love Groupon! The year before last, we all went to Sky Zone, which is this place that has wall-to-wall trampolines. When I was younger, we didn’t have a lot of money, so now, as an adult, I’m like, Yeah, I can just spend money on doing fun stuff! I can take my friends bowling and then to the movies and then to jump on trampolines all in the same day! 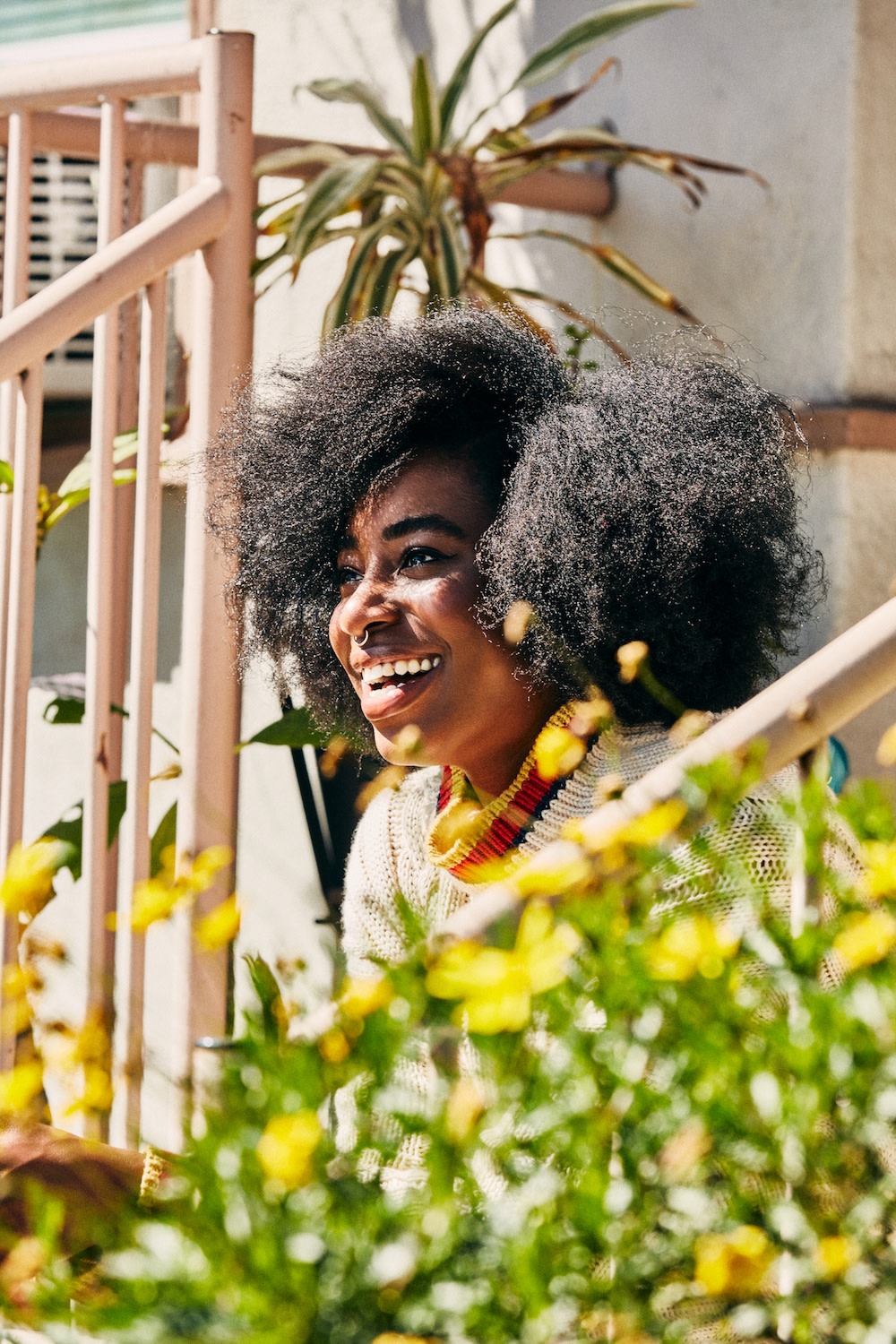